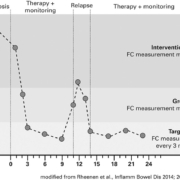 Laboratory tests play an important role in the diagnosis and differentiation of chronic inflammatory bowel diseases, enabling endoscopies to be avoided in many cases.
By Dr Jacqueline Gosink

Fecal calprotectin (FC) has in recent years become an established marker for distinguishing chronic inflammatory bowel diseases (CIBD) from functional gut disorders such as irritable bowel syndrome (IBS) and for monitoring the disease activity in CIBD patients. FC determination can be complemented by serological tests for disease-specific antibodies, which enable differentiation of the two main forms of CIBD, namely Crohn’s disease (CD) and ulcerative colitis (UC). New therapeutic drug monitoring assays measure the level of infliximab or adalimumab in patient blood and the presence of inhibitory antibodies against these drugs, allowing the medication and dosage to be tailored to the patient’s individual response.

CIBD
CIBD are autoimmune diseases which are characterized by inflammation of different regions of the gastrointestinal tract. UC affects predominantly the colon, while CD can affect any part of the gastrointestinal tract. The diseases are episodic with symptomatic phases (relapses) alternating with asymptomatic phases (remission). The severity of the symptoms and the duration of relapses vary from patient to patient. Diagnosis of CIBD is based a combination of clinical symptoms, endoscopy, histology, radiology and laboratory diagnostics. In order to obtain a definitive diagnosis the inflammatory status of the intestinal epithelium is investigated using invasive methods such as endoscopy and biopsy. These procedures are, however, costly and unpleasant for patients. Laboratory tests, especially measurement of FC and detection of disease-specific antibodies, provide valuable non-invasive support for CIBD diagnostics.

FC
When the intestinal tract is inflamed, neutrophile granulocytes migrate through the intestinal mucosa into the lumen and secrete calprotectin. The calprotectin accumulates in feces and is secreted with it. FC can therefore be used as a marker for inflammatory processes that affect only the gastrointestinal tract. Its concentration is proportional to the degree of inflammation. FC is more effective for CIBD diagnostics than general clinical indices and classical serological inflammation markers, such as erythrocyte sedimentation rate (ESR), C-reactive protein (CRP) or leukocyte count.
Moreover, calprotectin is already produced at the start of the disease, making it a suitable marker for early diagnosis. Measurement of FC is especially suitable for differentiating CIBD from IBS. Only patients with elevated FC need to be referred for further invasive tests. FC is also a suitable surrogate marker for assessing the disease activity and for predicting disease recurrence after surgery. The risk of relapse is proportional to the measured FC value (Fig. 1).
Low FC concentrations are associated with long-lasting remission, while high values indicate ongoing or recurring inflammation requiring further investigation and intervention. Current international guidelines for CIBD diagnostics, for example from the European Crohn’s and Colitis Organisation [1], recommend measuring FC for differential diagnostics and also highlight the good correlation between the FC concentration and the disease activity. An FC concen-tration of less than 50 µg/g is considered inconspicuous and excludes an inflammatory cause of intestinal complaints with high certainty. Values between 50 µg/g and 120 µg/g lie in the borderline range and further monitoring of patients is indicated, for example by measuring FC again after two to three weeks. When the FC concentration is greater than 120 µg/g, the inflammatory status of the epithelium should be examined using imaging methods.
FC measurement
Calprotectin can be measured quickly and efficiently in stool samples using ELISA. The EUROIMMUN Calprotectin ELISA, for example, takes just 75 minutes and can be processed manually or automatically. It offers a broad measurement range of 1.9 to 2100 µg/g and correlates well with other FC assays. Pre-analytical sample preparation can be reduced to a minimum through the use of special stool dosage tubes, which enable extraction of a defined amount of stool in just one step.
In a study with stool samples from 47 clinical characterised patients with CIBD or IBS (Fig. 2), the Calprotectin ELISA from EUROIMMUN yielded a sensitivity of 94.1 % at a specificity of 95.5 % (excluding samples in the borderline range). Thus, there was a very high correlation between the FC level and the clinical diagnosis.

CIBD-associated antibodies
Serological determination of disease-specific antibodies provides additional support in CIBD diagnostics, enabling non-invasive differen-tiation between CD and UC (Table 1). Combined testing for all relevant antibodies is recommended to increase the diagnostic sensitivity [2].
Autoantibodies against acinus cells of exocrine pancreas are a reliable marker for CD. They have a high significance due to their organ specificity, disease association and frequently high serum concentration. The main target antigens of these autoantibodies are the proteoglycans CUZD1 (rPAg1) and GP2 (rPAg2) [3]. Antibodies against Saccharomyces cerevisiae (ASCA) enrich the diagnosis of CD by a further parameter. The presence of ASCA can indicate a more severe disease course of CD requiring aggressive immunotherapy.

Autoantibodies against intestinal goblet cells occur exclusively in UC. The target antigen of these autoantibodies has not yet been identified. Anti-neutrophile cytoplasm autoantibodies (ANCA) represent a further marker for UC. In the indirect immunofluorescence test (IIFT) they generate a perinuclear (pANCA) reaction on ethanol-fixed granulocytes, but no reaction on formalin-fixed granulocytes. This pattern contrasts with ANCA in vasculitis, which show a reaction on both substrates. The most important target antigen of ANCA in CIBD is DNA-bound lactoferrin.

Therapeutic drug monitoring
There is no cure for CIBD, and therapy focuses on reducing inflammation and relieving symptoms. Patients are frequently administered with tumour necrosis factor α (TNFα) inhibitors like infliximab or adalimumab. Due to different clinical responses to these biologics, the dosage must be optimized for each patient. By measuring the drug concentration in blood, the most suitable dose can be individually determined. Despite the good overall effectiveness of these drugs, a substantial number of patients form antibodies directed against the drugs, which can hamper the function of infliximab or adalimumab. Low drug levels can be an indication for the presence of these anti-drug antibodies (ADA). Regular monitoring of drug levels and determination of ADA enables fine tuning of the drug dosage, early switch to other therapeutics and prevention of side effects.
The concentration of infliximab or adalimu-mab in patient sera can be precisely deter-mined using MabTrack Level ELISAs (Sanquin Reagents, distributed by EUROIMMUN). As complementary tests, MabTrack Anti-Drug Antibody ELISAs enable specific detection of antibodies against infliximab or adalimumab. The ELISAs are easy to perform and can be fully automated. Thus, under or over treatment of CIBD can be recognised promptly and medication and dosage adjusted accordingly.

Perspectives
Reliable laboratory diagnostics for CIBD enable the number of endoscopies to be reduced by about two thirds, a benefit for both patients and healthcare budgets. FC determination represents a simple, non-invasive method to select patients for endoscopic clarification. This is especially relevant given the much higher prevalence of IBS (10-20 %) compared to CIBD (around 0.4 %). FC measurement also allows regular assessment of the disease activity without the need for endoscopy, enabling more efficient patient management. Multiplex antibody testing allows CD and UC to be differentiated. A clear distinction between the two diseases is important due to significant differences in treatment and prognosis. Therapeutic drug monitoring of patients on infliximab or adalimumab is ushering in a new era of personalized treatment for CIBD patients, whereby the medication and dosage can be optimised to the patient’s exact needs. Since infliximab and adalimumab are also used to treat other autoimmune diseases, especially rheumatoid arthritis and psoriasis, these assays will also play an important future role in other areas of medical diagnostics.