The in situ stage of conjunctival squamous cell carcinoma is called conjunctival squamous intraepithelial neoplasia (CSIN). The use of terms such as Bowen’s disease and ocular surface squamous neoplasia are discouraged as their meanings vary and are prone to misinterpretation. The severity of squamous epithelial dysplasia is graded by the proportion of involved surface epithelium. The histopathologic differential diagnosis includes squamous papilloma, reactive hyperplasia and other types of in situ neoplasia, including sebaceous.

The intraepithelial proliferation of neoplastic keratinocytes of conjunctiva represents the pre-invasive, or in situ stage of squamous cell carcinoma. Since the early 1900s, several names have been applied to the in situ phase of development but the most appropriate and least prone to misinterpretation is conjunctival squamous intraepithelial neoplasia (CSIN). The timely and accurate diagnosis of CSIN, both clinically and histologically, is essential to minimizing the risk of progression to squamous cell carcinoma [1,2]. 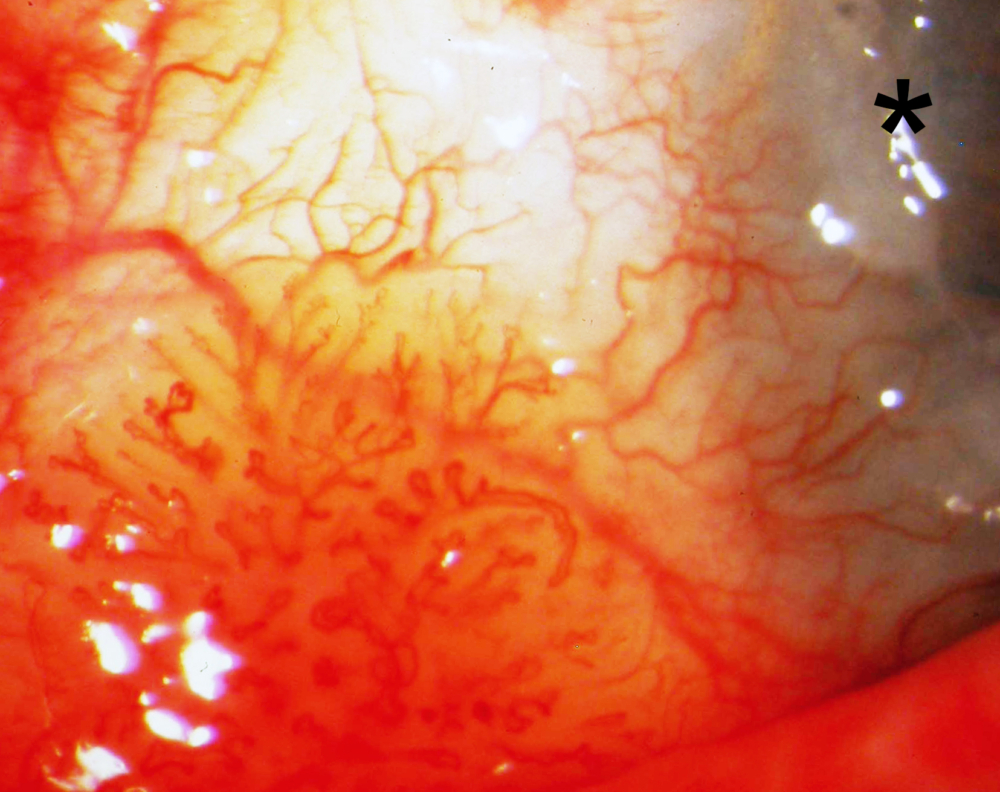 Most lesions of CSIN arise within interpalpebral conjunctiva at the ocular limbus as a translucent to beige-coloured thickening. Surface whitening often reflects keratinization (Fig. 1). In persons with dark complexions, CSIN may appear tan or brown due to melanocytic hyperplasia. Structurally, lesions range from solid to papillomatous and over time extend irregularly onto the conjunctiva or cornea. In situ neoplasia of the cornea often imparts a frosted-glass appearance to the normally transparent tissue.

CSIN is found worldwide and is associated with aging. The study of its pathogenesis is inseparable from that of squamous cell carcinoma of the conjunctiva, and causation is likely to be multifactorial [1]. Chronic ultraviolet light exposure and human papilloma virus play critical but incompletely understood roles in the initiation of neoplasia [3]. When CSIN occurs in persons under 40 years old, other risk factors, such as immunosuppression, are usually found [4]. Concepts of CSIN have been influenced by the study of in situ squamous neoplasia in other tissues, particularly the uterine cervix, over the last 60 years. Unlike squamous epithelial dysplasia of the cervix, however, the risk of progression to squamous cell carcinoma has not been positively correlated with the severity of conjunctival dysplasia. Several factors may explain this, the most relevant of which is that biopsy (treatment) of CSIN interferes with the natural history of the disease much more so than the cervix.

The normal conjunctiva is lined by squamous epithelium eight to ten cells thick (Fig. 2). Normal conjunctival keratinocytes do not keratinize and there is no granular cell layer. Goblet cells are often present. The diagnosis of in situ squamous neoplasia is based on the presence of atypical keratinocytes and disordered cellular maturation, which together are the working definition of dysplasia. The severity of dysplasia exists along a spectrum and is subdivided as mild, moderate, severe and carcinoma in situ (Figs 3, 4 & 5).
As the conjunctival epithelium is thin, the assessment of disordered maturation can be challenging. The idea that the risk of progression to squamous cell carcinoma is proportional to the thickness of involvement is biologically plausible but currently lacks definitive clinical evidence. The severity of cellular pleomorphism plays no role in the categorization of dysplasia. Although highly pleomorphic lesions intuitively seem more aggressive, the degree of cellular differentiation can only be communicated to clinicians as a comment in the pathology report or in the histopathologic description (Figs 6 & 7). Large atypical cells, however, should arouse suspicion of other in situ neoplasms, particular sebaceous carcinoma. Intracellular mucin demonstrated with an Alcian blue stain supports the diagnosis of in situ adenosquamous carcinoma, an aggressive variant of CSIN, previously referred to as mucoepidermoid carcinoma [5]. Unless specific entities in the differential diagnosis of CSIN are being entertained, routine immunohistochemical (IHC) stains have limited utility.

The possibility of intraepithelial sebaceous carcinoma is raised by either the presence of pagetoid cells, large atypical cells with clear cytoplasm, or sheets of large atypical cells that replace surface epithelium, with or without vacuolated cytoplasm that suggests cytoplasmic lipid (Fig. 8) [1,2]. The expression of adipolin or androgen receptors identified through IHC stains support the diagnosis of sebaceous carcinoma. Although rare, non-pigmented conjunctival melanocytic intraepithelial neoplasia (or primary acquired melanosis with atypia) can also be mistaken for CSIN (Fig. 8). The presence of nested cells or pagetoid cells should raise suspicions of in situ melanoma, a diagnosis confirmed with one of a number
of melanocytic markers (e.g. SOX-10, Melan A, etc.).

Conjunctival papillomas can display mild dysplasia when irritated or inflamed. They may also demonstrate high mitotic counts and elevated Ki-67 indices [6]. The uniformity of cellular maturation, comingling of goblet cells, and perinuclear halos are helpful in distinguishing squamous papilloma from squamous neoplasia. The distinction between pseudoepitheliomatous hyperplasia and well-differentiated CSIN is difficult [1,2,7]. Lower mitotic rate and bland nuclear chromatin are indicative of reactive hyperplasia, along with the absence of substantial cellular atypia. The keratinizing lesion found in vitamin A deficiency (Bitot spot, or xerophthalmia) lacks cellular atypia. The inherited condition known as hereditary benign dyskeratosis also lacks cellular pleomorphism. This exceptionally rare condition is characterized by apoptotic cells that have orange-coloured cytoplasm and pyknotic nuclei scattered through mid- and upper levels of the epithelium [8].

Grading epithelial dysplasia as mild, moderate and severe by the amount of surface epithelial involvement is conceptually easy to understand but often is difficult to implement in practice when the conjunctival epithelium is thin. Reactive atypia due to inflammatory disorders of conjunctiva has features that overlap those of mild neoplastic dysplasia. The distinction can at times be challenging. Histologic grading of CSIN also does not take into account the severity of pleomorphism as an independent variable, although cellular differentiation has proven in general pathology to predict the clinical behaviour of many neoplasms. Evidence is lacking on how cellular differentiation alone impacts clinical outcome of CSIN [1].

Communication between clinicians and pathologists is often hampered by medical terminology. The use of actinic keratosis to describe a keratinizing dysplasia of conjunctiva is one example [9]. A more serious problem arose after the introduction of the concept of ocular surface squamous neoplasia (OSSN) which described the entire range of squamous neoplasia from mild dysplasia to invasive squamous cell carcinoma [10]. The concept of a spectrum disease is reasonable, but some clinicians confuse OSSN as synonymous with CSIN, which it is not. This mix up can lead to suboptimal treatment of squamous cell carcinoma [11].

CSIN is the precursor of squamous cell carcinoma and the most common ocular surface malignancy. Mild squamous epithelial dysplasia can be difficult to differentiate from reactive atypia. High-grade lesions displaying cellular pleomorphism need to be distinguished from other in situ neoplasms that involve conjunctiva such as in situ sebaceous carcinoma. Effective communication is enhanced when standard medical terminology is used to grade and report CSIN.