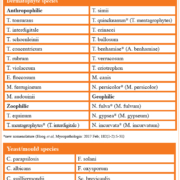 Dermatomycoses are extremely widespread, and are characteristically long-lasting, recurring and very difficult to cure. Early and accurate identification of the causative agent is essential for targeted therapy. A new DNA microarray provides direct detection and differentiation of the most important dermatomycosis pathogens in one reaction. The assay simultaneously detects up to 50 dermatophyte species, and provides species identification for 23 of these, as well as 6 yeasts and moulds. The microarray analysis aids differential diagnosis of dermatomycoses from other dermatoses (e.g. psoriasis), and specifically identifies mixed infections with yeasts and moulds. The dermatomycosis microarray is part of the established EUROArray platform, which also includes microarrays for multiplex identification of sexually transmitted infections (STI) and complete detection and typing of human papillomaviruses (HPV).

Dermatomycosis
Dermatomycoses are infections of the skin, hair and nails which are typically caused by dermatophytes and in rarer cases by yeasts and moulds. Fungal infections of the skin are the most frequently occurring infectious diseases globally with high and growing relapse rates. Elderly people and immunocompromised patients are especially at risk. Worldwide, around 20 to 25% of the population is affected by fungal skin diseases.

Infections which are caused exclusively by dermatophytes are referred to as dermatophytoses or tinea. Tinea pedis, which occurs on the soles of the feet and between the toes, is one of the most frequent forms worldwide, followed by tinea unguium, which affects the nails, and tinea corporis, which affects the neck, back or trunk. Further forms, for example, on the face, legs, beard area, arms and hands, are rarer. Nail infections caused by dermatophytes and/or yeasts/moulds are called onychomycoses. They are typically accompanied by deformation of the nail.

Around 70% of human dermatophyte infections are caused by anthropophilic species. Trichophyton rubrum, in particular, is the most frequent cause of fungal skin infections worldwide. Infections can spread easily to other areas of the body or to other persons, for example, via showers, bathtubs or floors. Zoophilic dermatophytes are transmitted to humans by close contact with animals, especially pets, which are often asymptomatic. They can cause severe inflammatory reactions in humans. Geophilic dermatophytes cause disease less frequently in humans. Infections typically occur in gardeners and farm workers or children who play outside. Moulds and yeasts often cause opportunistic infections, benefitting from damage to the skin or nail caused by an existing dermatophyte infection. In immunocompromised individuals, local fungal infections may develop into systemic mycosis.

Clinical picture
Dermatomycoses are clinically heterogeneous and cannot always be differentiated from other dermatoses, such as eczema, psoriasis, erysipelas, or autoimmune diseases such as Lichen ruber planus. Furthermore, 5 to 15% of onychomycosis cases comprise mixed infections of dermatophytes with yeasts and moulds. Simultaneous bacterial infection of the damaged skin, pretreatment with corticosteroid-containing preparations, or secondary contact allergy can also hinder diagnosis.

Dermatomycoses must always be treated. This is generally undertaken using various topical antifungal drugs, with severe cases sometimes requiring oral medication. Each drug has a limited activity spectrum. Positive pathogen identification prior to treatment enables targeted selection of the most suitable drug and optimal planning of the oftentimes lengthy therapy. In multiple infections, a change of the primary pathogenic agent may occur during the therapy and it may seem like the therapy is failing. This must be taken into account in the treatment of fungal infections of the nails, which may only yield first success after months. Identification of the causative pathogen also helps to determine the source of the infection. In the case of zoophilic pathogens, for example, this is usually a pet.

Laboratory diagnostics
Laboratory diagnostic methods for identifying dermatomycosis pathogens include microscopic detection and an attempt at culturing from clinical material. Successful culture in most cases enables species assignment based on micro- and macromorphological presentation of the fungus. Culturing is, however, time-consuming and is not possible for all dermatophytes. In mixed infections, false diagnoses may occur since slowly growing species may be overgrown or overlooked. Furthermore, antifungal therapy started before the sampling can hinder the culture.

Direct detection of pathogen genomic material by DNA microarray enables secure and accurate identification of the causative agent. Microarray analysis offers a significant time advantage over detection by culturing, and is especially useful for detecting dermatophytes that are difficult to cultivate. It provides higher sensitivity and specificity, even in patients already undergoing treatment. The EUROArray Dermatomycosis analysis includes a universal dermatophyte detection encompassing 50 species of the genera Trichophyton, Epidermophyton, Microsporum, Nannizzia, Arthoderma, Lophophyton, as well as species identification for the 23 dermatophyte and 6 yeast and mould species listed in Table 1.

EUROArray procedure
The EUROArray procedure (Figure 1) is performed on DNA samples isolated from skin scales, nail shavings or hair stubs. Defined gene sections of the pathogens are first amplified by multiplex polymerase chain reaction (PCR). The fluorescently labelled PCR products are then incubated with biochip microarray slides containing immobilized complementary probes. Specific binding (hybridization) of the PCR products to their corresponding oligonucleotide probes is detected using a special microarray scanner. The signals are evaluated and interpreted automatically by the EUROArrayScan software (Figure 2). A detailed result report is produced for each patient and all data are documented and archived. Meticulously designed primers and probes, ready-to-use PCR components and integrated controls all contribute to the reliability of the analysis. The entire EUROArray procedure from sample arrival to report release is IVD-validated and CE-registered, supporting quality management in diagnostic laboratories.

Specifications and evaluation
The lower detection limit of the test system depends on the pathogen and lies between 50 and 600 DNA copies per reaction, in individual cases also higher. Evaluation studies verified that template DNA in concentrations ranging from the lower detection limit to 50 ng can be used in the PCR without generating any false positive results. Furthermore, potential cross reactivity with 37 microorganisms of the resident and transient skin flora was excluded experimentally.

In an evaluation study with 409 clinical samples, the EUROArray Dermatomycosis yielded a good agreement with the precharacterization. In many cases additional pathogens that were not included in the precharacterization were detected. The additional findings were confirmed by further independent tests or sequencing. Thus, the microarray provides reliable results and broad detection capabilities.

STI detection
The EUROArray STI is based on the same technology and provides parallel direct detection of the pathogenic agents of eleven sexually transmitted infections (STIs) in one reaction, namely Chlamydia trachomatis, Neisseria gonorrhoea, Mycoplasma genitalium, Mycoplasma hominis, Ureaplasma urealyticum, Ureaplasma parvum, Haemophilus ducreyi, Treponema pallidum, Trichomonas vaginalis and herpes simplex viruses 1 and 2.
STIs are often asymptomatic, but can nevertheless lead to serious sequelae, for example infertility, fetal damage during pregnancy, and severe postnatal infections in newborns. The PCR-based detection allows identification of both manifest and silent infections, and is thus suitable for diagnosis of symptomatic patients as well as for general screening. It offers a huge time advantage over cultivation and is especially useful for detecting sexually transmitted pathogens that are difficult or impossible to cultivate, e.g. C. trachomatis, Mycoplasma, Ureaplasma, T. pallidum. Due to amplification of the pathogen DNA, infections with a reduced pathogen number can also be reliably detected. A broad screening for STI pathogens is particularly important in asymptomatic or clinically ambiguous cases and for detecting multiple infections, which are often missed during single-parameter testing.

HPV detection and typing
The EUROArray HPV provides detection and typing of all 30 genitally relevant HPV subtypes in one test. HPV are involved in the development of cervical carcinoma, and HPV testing plays a central role in risk assessment and early diagnosis of this cancer. In contrast to Pap examinations, HPV detection is not dependent on subjective evaluation and it offers very high sensitivity even in the early stages of infection.
The EUROArray HPV is based on detection of the viral oncogenes E6 and E7, which provides the highest possible sensitivity. Using an extensive panel of specific primers and probes, the EUROArray detects and distinguishes between 18 high-risk subtypes that may trigger cancer (16, 18, 26, 31, 33, 35, 39, 45, 51, 52, 53, 56, 58, 59, 66, 68, 73, 82) and 12 low-risk subtypes that cause benign genital warts (6, 11, 40, 42, 43, 44, 54, 61, 70, 72, 81, 89). Multiple infections are reliably identified, and primary and persistent infections can be differentiated. A positive result for a high-risk subtype indicates an increased risk for cervical carcinoma, which can then be minimised by more frequent follow-up examinations to detect morphological cell changes at an early stage. Based on the recommendations of the respective professional societies, HPV-negative women can forgo subsequent HPV tests and Pap smears for a longer time interval.

Conclusions
Molecular diagnostic tests such as the EUROArray are an important tool for identifying the precise pathogenic agent in various infectious diseases, supporting decision-making on specific treatment. The new EUROArray Dermatomycosis provides the most comprehensive direct detection of dermatomycosis pathogens currently available commercially, and complements existing assays for STI and HPV. The EUROArray procedure is easy to perform and does not require extensive expertise in molecular biology. Moreover, the fully automated evaluation ensures objective, accurate and reproducible results. Further infectious disease microarrays based on the same technology are in development. 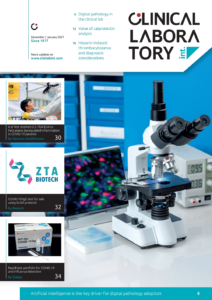