Researchers from the Fraunhofer Institute for Biomedical Engineering (IBMT) have developed the “BioSensoLab“, a mobile biological laboratory with which they can demonstrate new developments to customers and test them together – on site at their companies. These new technologies rely in particular on intelligent sensors combined with artificial intelligence to perform analyses. The lab was presented at the MEDICA 2022 trade fair in Düsseldorf fin November.

“Never change a running system” – this is especially true for companies. Before adopting new methods into their ongoing production and thus risking production lines coming to a standstill, the processes must be tried and tested extensively. And ideally that should happen on site. However, the conditions are not always suitable for this. Proximity to the site takes on additional importance when it comes to artificial intelligence (AI) in combination with sensitive data. After all, the AI must first be trained with appropriate data in order to be able to assess sensor data that is recorded later and make decisions based on this. To do this, the data is often moved to the cloud via the internet. However, companies prefer to keep sensitive data in-house. 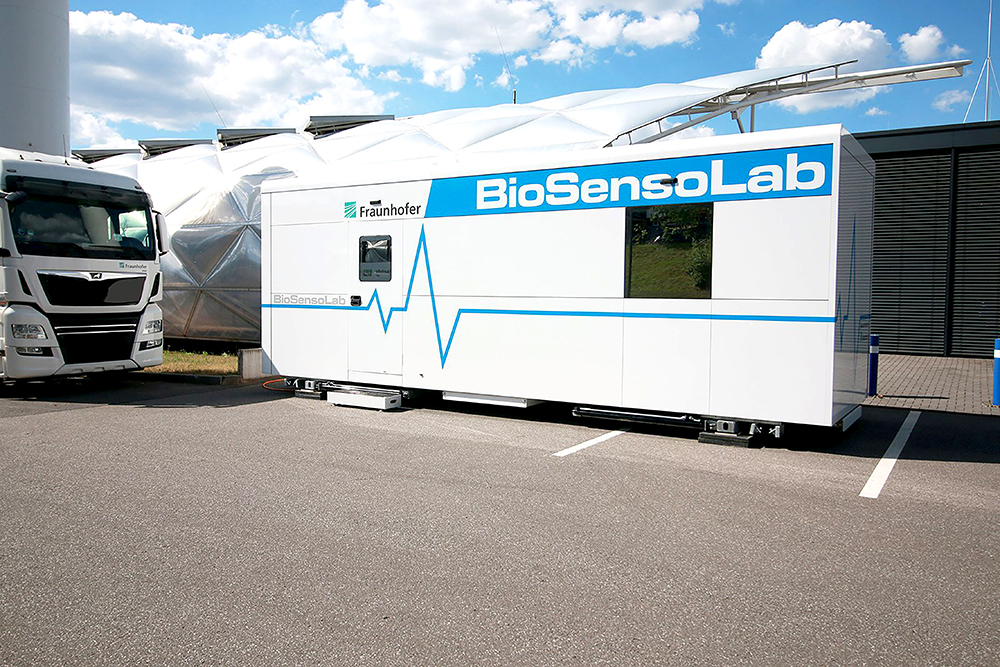 BioSensoLab
Researchers from Fraunhofer IBMT have developed a solution for this. “With our BioSensoLab mobile work platform, we can demonstrate new technologies, for example in the field of stem cell production, directly at the customer’s site and apply them together,” explains Dr Thomas Velten, working group leader at Fraunhofer IBMT. “In addition, sensitive data does not need to leave the organization – the lab can be set up in a factory hall on the company’s premises, for example.”

This is because, with a length of 7.8 metres, a width of 2.5 metres and a height of 3 metres, it offers sufficient space for biological and other investigations but does not take up too much space. The lab is designed as an BSL-2 laboratory and can therefore be used for biological investigations. Biosafety level 2 includes working with microorganisms that pose a potential hazard to laboratory staff and the environment. Examples of such agents are salmonella, herpes pathogens or flu viruses. BSL-2 laboratories usually have access control and are equipped with facilities to contain infection gases and liquids.

The digital infrastructure of the “BioSensoLab“ is also designed in such a way that it can be integrated into existing electronic data processing systems (EDP) and production facilities. The modular interior equipment can be flexibly adapted to requirements; it can be moved and is easy to install or remove. To change its location, the lab can be transported using an integrated lifting device and a truck.

Developing the mobile BSL-2 lab required the pooling of various areas of expertise: An industrial partner from the special-purpose vehicle sector contributed its know-how in the construction of transportable units, while the researchers at Fraunhofer IBMT contributed their expertise in biological laboratories.

“Over the years, we have also acquired the expertise to build mobile labs, so we were able to design it and coordinate its construction,” says Dr Velten. “So on the one hand, we know how a laboratory has to be equipped, for example in terms of heating, ventilation, and air conditioning (HVAC) technology but, on the other hand, we also know what equipment the vehicle manufacturer can install.”

Intelligent sensors
When building the mobile laboratory, the Fraunhofer IBMT researchers already had specific applications in mind, namely the technologies that they are currently developing at the new Fraunhofer Center for Sensor Intelligence ZSI in collaboration with the Fraunhofer Institute for Nondestructive Testing IZFP.

The linchpin of this: Intelligent sensors are collecting increasingly more data that has to be condensed into meaningful information – which is almost impossible for humans to handle. Artificial Intelligence can score some points here: It analyzes the deluge of data and makes decisions based on the results, almost in real time. These decisions not only minimize wear and waste but also improve the quality of the products produced.

One example of such an intelligent sensor system, which researchers are currently developing, falls within the area of stem cell production.

“We don’t just want to check parameters such as temperature and pH value – and potentially end up having to throw away an entire batch
as we have in the past – but instead we want to characterize and monitor the stem cells themselves by means of intelligent sensors. And, if possible, without having to remove them from the bioreactor,” explains Dr Velten. The research team is currently working out exactly how this can be achieved. The mobile laboratory offers the ideal conditions for involving industrial enterprises in the development process and for conducting joint research on site, as well as for demonstrating the developments to interested parties.

Another example of such developments are beating heart cells, which are already being grown at Fraunhofer IBMT and used in test systems. In the future, the researchers plan to grow these cells as 3D models in multiwell plates, containing, for example, 96 small wells side by side. Parallelized and automated toxicological studies will be performed in these multiwell plates: How does a heartbeat change when you add certain substances, such as compounds? This and other technologies can be developed, demonstrated and deployed with industry partners in the mobile laboratory. 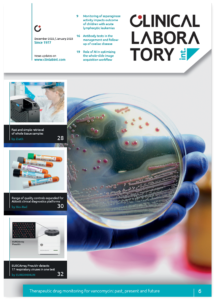