Cardiac surgery with cardiopulmonary bypass is associated with significant alterations in the hemostatic system. Standard laboratory coagulation tests are frequently used to assess coagulopathies and to guide hemostatic interventions. However, these tests present major limitations. Viscoelastic testing in conjunction with the implementation of a specific algorithm for coagulation management in cardiac surgery enables better control of perioperative coagulopathies.

Cardiac surgery and the hemostatic system

Cardiac surgery with cardiopulmonary bypass (CPB) is associated with significant alterations in the hemostatic system. Consequently, approximately 20% of patients present with postoperative bleeding. This causes high rates of surgical re-exploration due to bleeding (reaching 7% in valve surgeries), and high consumption of blood products, which results in high rates of morbidity and mortality associated with this type of intervention [1]. Adverse outcomes include blood-borne infections, transfusion reactions, respiratory dysfunction, increased cost, kidney failure, and increased mortality rates [2].

This review focuses on coagulopathies known to occur in cardiac surgery and addresses the monitoring of these hemostatic alterations.

The most important hemostatic alterations associated with CPB include the following.

Dilutional coagulopathy
Dilutional coagulopathy is mainly related to the priming of the CPB circuit and liberal crystalloid administration, and constitutes an important cause of coagulopathy in patients undergoing cardiac surgery. At the physiological level, it decreases circulating hemoglobin levels, reduces plasma concentrations of coagulation factors (factor VIII and von Willebrand factor), and causes thrombocytopenia and impaired platelet function.

Hypothermia
Hypothermia is induced intentionally to enable surgery during cardiac arrest. Hypothermia results in longer operative times, increasing the risk of infections and prolonging the contact time between the blood and the CPB circuit [3].

Acidosis
Acidosis is often induced by hypoperfusion and excess administration of NaCl during resuscitation and massive transfusion of blood products. Acidosis affects almost all phases of the coagulation process.

Anticoagulation
Heparin (which considerably increases antithrombin activity) and protamine (used for heparin anticoagulation reversal) are administered during cardiac surgery. The use of heparin can cause hemorrhage due to the appearance of heparin-induced thrombocytopenia or due to an increase in heparin levels related with the rebound effect caused by the longer half-life of heparin compared to protamine [5].

These factors contribute to inflammatory and hemostasis dysfunction, which may lead to perioperative coagulopathy and postoperative bleeding.

Standard laboratory coagulation tests [prothrombin time (PT)/international normalized ratio or partial thromboplastin time (aPTT), platelet count, and, in some cases, fibrinogen concentration] are frequently used to assess coagulopathy and to guide hemostatic interventions. However, this has been challenged in numerous reports, which question the utility of standard laboratory coagulation tests in the perioperative setting and in the event of massive bleeding [6]. Although they are frequently used to monitor perioperative coagulation, there is no robust evidence supporting their value for diagnosing coagulopathy during surgery or transfusion therapy, and their use seems to be based more on ‘habit’ than on scientific evidence.

These standard laboratory coagulation tests present major limitations. First, these tests are time-consuming (with turn-around times sometimes longer than 60 minutes); these times can be so long that results do not reflect the actual current clinical situation of the patient. Second, they do not allow for rapid evaluation in situations of severe bleeding that require immediate, targeted treatment [6,7]. In addition, standard laboratory coagulation tests only allow assessment of the initial phase of the coagulation cascade: because these classic tests are performed on plasma, they do not take into account the role played by platelets or other blood cells in the process. As a result, these tests do not provide information about the last phase of the process or fibrinolysis, and are unable to detect hyperfibrinolysis [7]. Third, there is no clinical correlation between results from these standard tests and the patient’s hemostasis status. No real correlation has been shown between the presence of excessive bleeding and prolonged aPTT and PT [8]. When these tests return abnormal results (prolonged clotting times), treatment options range from fresh frozen plasma to coagulation factor concentrates (such as factor VII or prothrombin complex concentrates). The administration of this type of product may be associated with the appearance of serious complications and, therefore, their administration must be rigorously justified [5]. Finally, in the case of platelets, these tests only provide quantitative information and do not inform about their functional capacity, and thus do not provide information about abnormalities acquired or induced during the procedure [7].

These standard laboratory coagulation tests are plasma-based tests that were essentially designed to monitor the action of vitamin K antagonists and heparin, and to assess coagulation factor deficiencies. The latter assays were not intended for monitoring of perioperative coagulation disorders, to predict bleeding, or to guide antihemorrhagic therapy in the perioperative setting [5].

Whole-blood viscoelastic tests [thomboelastography (TEG) and rotation thromboelastometry (ROTEM)] were developed by Hartert in 1948, and allow complete, dynamic measurement of the viscoelastic properties of blood with graphical representation of clot formation and the lysis process [9].

Both POCT technologies, TEG and ROTEM, are based on the same principle; although both terms are used interchangeably in the literature, there are subtle differences between them. In both tests, a citrate-anticoagulated blood sample is placed on a disposable cuvette (previously warmed to 37 °C) using an electronic pipette. A sensor or pin is placed in the sample and slowly rotated, generating a signal that is transmitted to a detector (in the case of TEG, the cuvette is rotated, rather than the pin). The method is based on the measurement and representation of the increasing resistance to which the pin is subjected as the coagulation process takes place. The assay begins with the addition of various reagents, and provides complete, detailed information on the processes of clot formation and lysis. Finally, the instrument graphically represents all stages of clot formation, together with a series of numerical parameters characterizing the hemostatic process, enabling the monitoring, diagnosis, and management of hemostasis disorders occurring during cardiac surgery [7].

Among the benefits of viscoelastic testing we would highlight the following.

However, several concerns have also been raised regarding the use of viscoelastic POCT coagulation monitoring tests [10]. A major limitation of standard viscoelastic testing is its insensitivity to the effects of antiplatelet drugs.

Some studies suggest that the implementation of viscoelastic POCT monitoring, such as TEG and ROTEM, in conjunction with a specific algorithm for coagulation management in cardiac surgery, allows for better control of perioperative hemostasis disorders.

The basic algorithm used for interpreting thrombobelastometry results (Fig. 1) [12] was conceived by the Essener Runde task force, which was created in 2001 and comprises specialists from different areas (anesthesia, intensive care, hematology, internal medicine, transfusion medicine, and surgery). The group is particularly interested in viscoelastic point-of-care tests, such as ROTEM [13].

Discussion: magnitude of the problem and whole-blood viscoelastic testing at a glance

Excessive peri-/postoperative bleeding is one of the most complex surgical complications due to its implications for short- and long-term morbidity and mortality. The management of this bleeding often requires re-exploration. Furthermore, patients undergoing reintervention present a postoperative progression characterized by a high rate of complications, greater consumption of blood products, longer ICU stays, and high mortality rates.

For all these reasons, it is essential to improve the monitoring and understanding of coagulopathies associated with cardiovascular surgery.

In this context, some studies suggest that the implementation of viscoelastic POCT monitoring, such as TEG and ROTEM, in conjunction with a specific algorithm for coagulation management in cardiac surgery, may allow for better control of hemostasis disorders. This targeted hemostatic therapy has been shown to be superior to empirical hemostatic therapy based on conventional laboratory coagulation tests and clinical judgment. Therefore, the use of viscoelastic testing, together with a specific algorithm for monitoring hemostasis, would appear to decrease transfusion requirements in cardiovascular surgery, associated morbidity, indirect hospital costs, and mortality [14,15]. 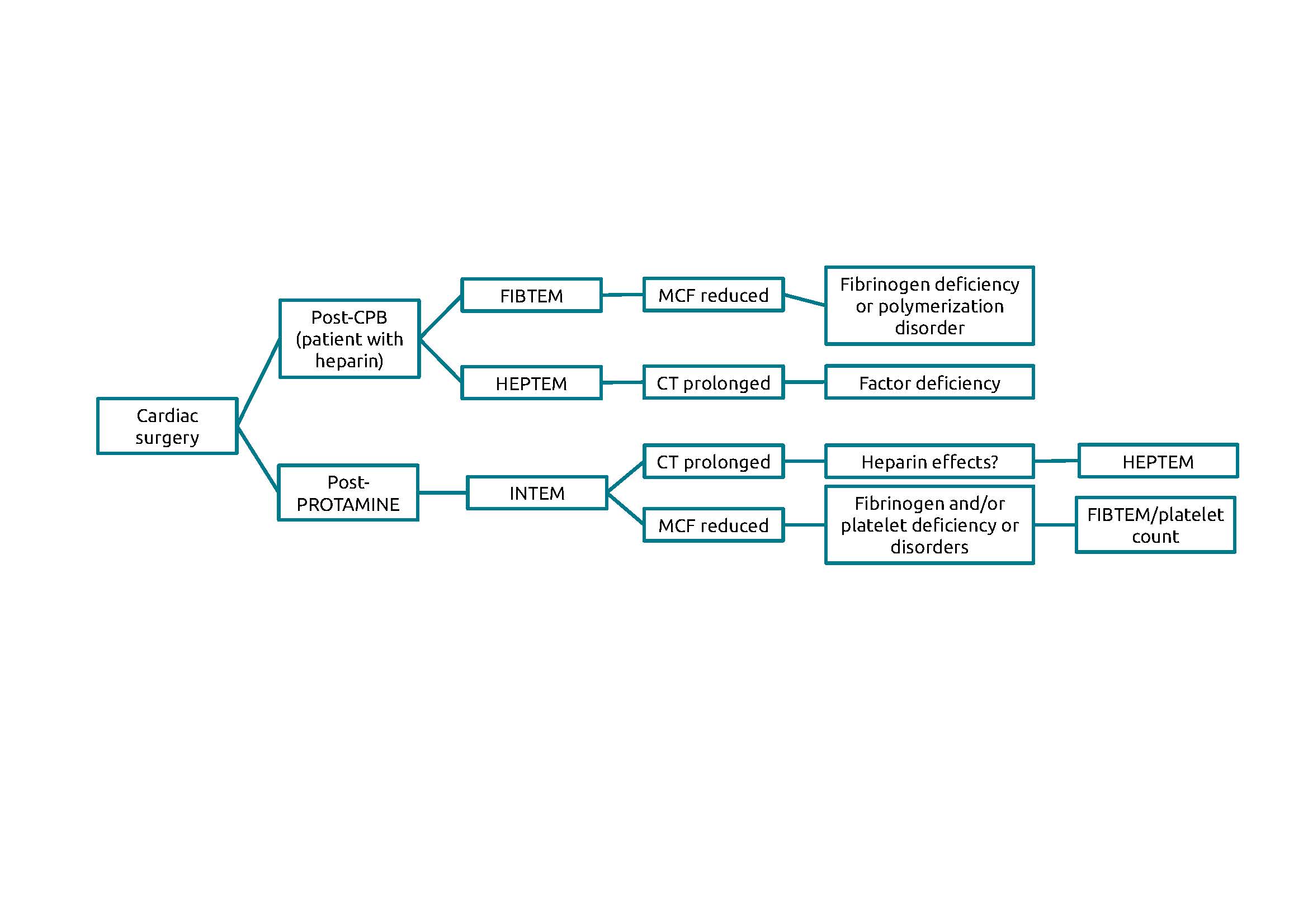 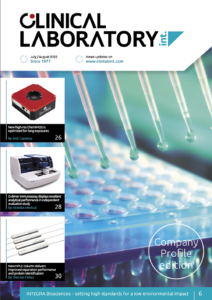