by Dr Samar Soliman and Prof. Chandra Mohan
Lupus nephritis is diagnosed with a renal biopsy. Unfortunately, a biopsy is invasive and cannot be serially repeated. Researchers are finding that proteins in the urine may have the potential to predict the ongoing pathology within the kidneys. Studies show that such urine biomarkers may have the potential to predict current and future disease outcome in this disease. Given that there may be many hundreds to thousands of proteins in the urine, how does one identify the most predictive of these candidates? Here we discuss three very different technologies that have contributed to this effort over the past year.

Systemic lupus erythematosus (SLE) is a complex chronic autoimmune disease of poorly understood etiology. The diversity of presentations and accumulation of manifestations over time makes SLE sharply different from other organ-specific autoimmune diseases and creates a distinct challenge for diagnosis, especially at the very early stage. Owing to its broad differential diagnosis and the urgent need for more efficacious therapies, several classification criteria have been introduced [1].
Lupus nephritis (LN) is a major cause of morbidity and mortality among SLE patients. Despite the difference in its impact on renal disease among ethnicities, LN globally reduces quality of life, starting from adversely affecting activities of daily living and work ability, ending with total impairment through end-stage renal disease (ESRD) [2]. Early detection of renal involvement in SLE is a real challenge, because of its asymptomatic subclinical onset and the possibility of relapse despite close monitoring and active management [3].

Renal biopsy remains the gold standard for the diagnosis and classification of LN. However, the necessity of having to perform a renal biopsy is not the best news a patient would want to hear. It is an invasive procedure requiring hospitalization, particular precautions and treatment modifications in certain situations. Subsequent complications could occur, and contraindications are present in some patients. Additionally, it is not suitable for routine follow-up, which is an important component in managing LN patients [4].

Finding a less invasive alternative to the renal biopsy has been a real challenge. Current urinary laboratory screening for LN rests mainly on urine protein-to-creatinine ratio (u-PCR) and simple urine analysis tests for active sediments, red blood cells and white blood cells. Despite being feasible for routine follow-up, they lack both sensitivity and specificity for diagnosing LN as well as the ability to differentiate active from chronic renal lesions [5]. Therefore, the quest continues for better biomarkers that can detect renal disease early and are able to predict disease flares in SLE patients. A biomarker is any substance quantitatively or qualitatively detected by laboratory methods, that reflects the presence of disease or disease activity, or predicts future disease course. In the case of LN, urine biomarkers appear more attractive and practical than serum markers, as they originate directly from the source of inflammation [4,5]. An ideal urinary biomarker is expected to be specific for renal involvement in SLE, accurate enough to track disease activity changes during serial monitoring, superior to conventional tests and easy to perform during routine clinical use.

Within the past year, refreshing new insights have been reported, shedding light on a flurry of promising urinary biomarker candidates. Novel, promising proteomic screening technologies such as electrochemiluminescence (ECL) immunoassay, aptamer-based assays and antibody-based microarrays have been introduced, empowering researchers the opportunity to unearth new disease biomarkers in an unbiased manner. Newer technologies have also succeeded in surmounting drawbacks associated with traditional enzyme-linked Immunosorbent assays (ELISA), including the high level of background noise, and the inability to carry out parallel interrogation of more than a dozen biomarkers at once [6]. Recent reports use three very different technologies in an attempt to identify novel urine biomarkers for LN, adopting an unbiased approach.

ECL
ECL is a type of luminescence produced during electrochemical reactions in solution to produce an electronically excited state which emits light upon relaxation. This novel platform creates independence between the input signal (the voltage) and the output signal (the chemiluminescent signal), allowing multiplexing and ensuring low background signal. Hence, each separate individual electrode can function as a separate assay to detect a unique protein [6]. In this report, 48 human urine samples were first interrogated for the levels of 40 proteins using a commercial Meso Scale discovery V-plex Human Biomarker 40-Plex Kit. This pre-fabricated ECL panel uses a combination of conventional sandwich ELISA and ECL technology. Levels of several urine proteins were significantly elevated. Of these, interleukin-7 (IL-7), IL-12p40, IL-15, 10KDa interferon gamma-induced protein (IP-10), and thymus and activation-regulated chemokine (TARC) were selected for further validation using a custom U-plex ECL assay, and an independent cohort of urine samples from 113 subjects (44 with active LN, 41 with inactive SLE, and 28 healthy controls). Importantly, these five proteins were undetectable by conventional ELISA assays, pointing to the heightened sensitivity of the ECL platform.
All five validated urinary biomarkers were significantly elevated among active LN patients compared to either inactive SLE or healthy controls. They showed outstanding diagnostic capabilities in discriminating active LN from inactive SLE with an area under the receiver operating curves (AUC) >0.91. Additionally, all five biomarkers surpassed serum C3, C4 and anti-dsDNA antibodies in predicting LN activity in the examined cohort. Despite showing similar sensitivity to conventional serum measures, the explored urine proteins exhibited substantially higher specificity, thus limiting the possibility of false positive results [6].

Taking all three recent reports together, a couple of lessons emerge. First, newer and better disease biomarkers will continue to emerge as screening platforms become more robust and comprehensive. In this respect, as ligand-based proteomics march from screening 1000 proteins to 10¦000 proteins over the next few years, more exciting biomarkers are sure to emerge. Second, several of the new biomarkers appear to be more predictive of active LN than conventional measures (anti-dsDNA, C3/C4, etc.) [6–8]. Third, many exhibit promise in tracking renal disease serially, something that is not feasible with the renal biopsy [8]. Fourth, urine markers such as angiostatin and VCAM-1 are also predictive of specific histopathologic features in concurrent LN renal biopsies. Specifically, they exhibit an outstanding ability to predict biopsy activity index score, particularly those higher than 7, known to be associated with poor prognosis [9]. Fifth, some of these proteins (e.g. urine VCAM-1 and ALCAM) were also able to predict long-term renal outcome in SLE patients. In a 10-year follow-up study, higher baseline VCAM-1 levels showed a 23-fold increased risk of deterioration in estimated glomerular filtration rate [10]. Sixth, urine biomarkers can perform differently in different ethnic groups. This raises caution that should be exercised in future study designs. Finally, these discoveries could lead to new therapeutics. In this respect, there is currently an ongoing clinical trial targeting ALCAM in lupus.
Clearly, urine biomarker discovery is an exploding area of investigation in LN, with tremendous growth anticipated in the coming years. Nevertheless, we should tread with caution as we are still far from being able to replace the current gold standard, the renal biopsy. The above reports are only the very first applications of these novel technologies in LN. Clearly, the markers identified need to be rigorously validated in multiple patient cohorts, comparing the performance of these markers to total proteinuria, in prospective clinical trials. An impediment in the field is the lack of well-characterized urine samples collected days or weeks before the onset of proteinuria or renal flares. Such a resource will allow researchers to identify urine biomarkers that emerge before proteinuria. Better screening technologies applied to better characterized patient cohorts is sure to unravel improved urinary markers for diagnosing and monitoring LN. This is particularly exciting given that emerging technologies now allow smartphone-based urine biomarker testing. The day when a LN patient can keep track of their disease from the comfort of their home using a urine test strip and smartphone is not far off.
The authors
Samar Soliman1 MD and Chandra Mohan*2 MD, PhD
1Department of Rheumatology and Rehabilitation, Faculty of Medicine,
Minia University, Minia, Egypt2
Department of Biomedical Engineering,
University of Houston, Houston, TX, USA 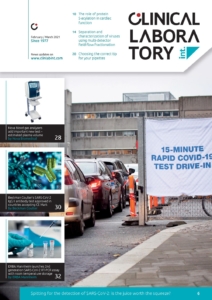