Calprotectin is a protein derived from neutrophils and its presence in feces can be used as a surrogate marker of gastrointestinal inflammation. Measurement is useful to differentiate inflammatory bowel disorder (IBD) from functional bowel disease, which has similar clinical features but different etiology, and to manage patients with established IBD.

Calprotectin and its use in gastrointestinal disease

Calprotectin is a 36-kDa member of the S100 family of calcium binding proteins. It is a heterodimer of the proteins S100A8 and S100A9 each of which can bind two Ca2+ ions and other divalent metal ions, for example zinc (Fig. 1). Calprotectin has a direct antimicrobial effect related to its ability to chelate metal ions and is involved in the innate immune response. Calprotectin is derived predominantly from neutrophils and accounts for about 60% of their cytosolic protein. It is found in various body fluids in proportion to the severity of any existing inflammation. The concentration of calprotectin in the feces of healthy individuals is about six times that of normal plasma, which led to the concept of its measurement in feces as a marker of gastrointestinal inflammation.

Gastrointestinal disorders are common and make up a sizeable proportion of the workload in primary care. Symptoms may be the result of disorders which have a demonstrable pathology or arise from functional disorders, in which gastrointestinal symptoms occur but no cause for them can be found. The inflammatory bowel disorders (IBDs) ulcerative colitis (UC) and Crohn’s disease (CD) are two organic bowel diseases for which calprotectin measurement has particular relevance. IBDs are believed to occur in a genetically susceptible host as a result of dysregulation of the immune response to commensal microbiota, but their pathophysiology is not completely determined. Both disorders are most common in young patients, peak incidence occurring between 15 and 30 years of age, with a peak prevalence of up to 0.5% in Western countries. CD can affect any part of the gastrointestinal tract and the characteristic histological appearance is of granulomatous inflammation which is transmural in extent. In UC, disease activity is limited to the colon and the inflammation is confirmed to the mucosal layer. The most common functional bowel disorder is irritable bowel syndrome, which has been estimated to have a worldwide prevalence of 11.2%. 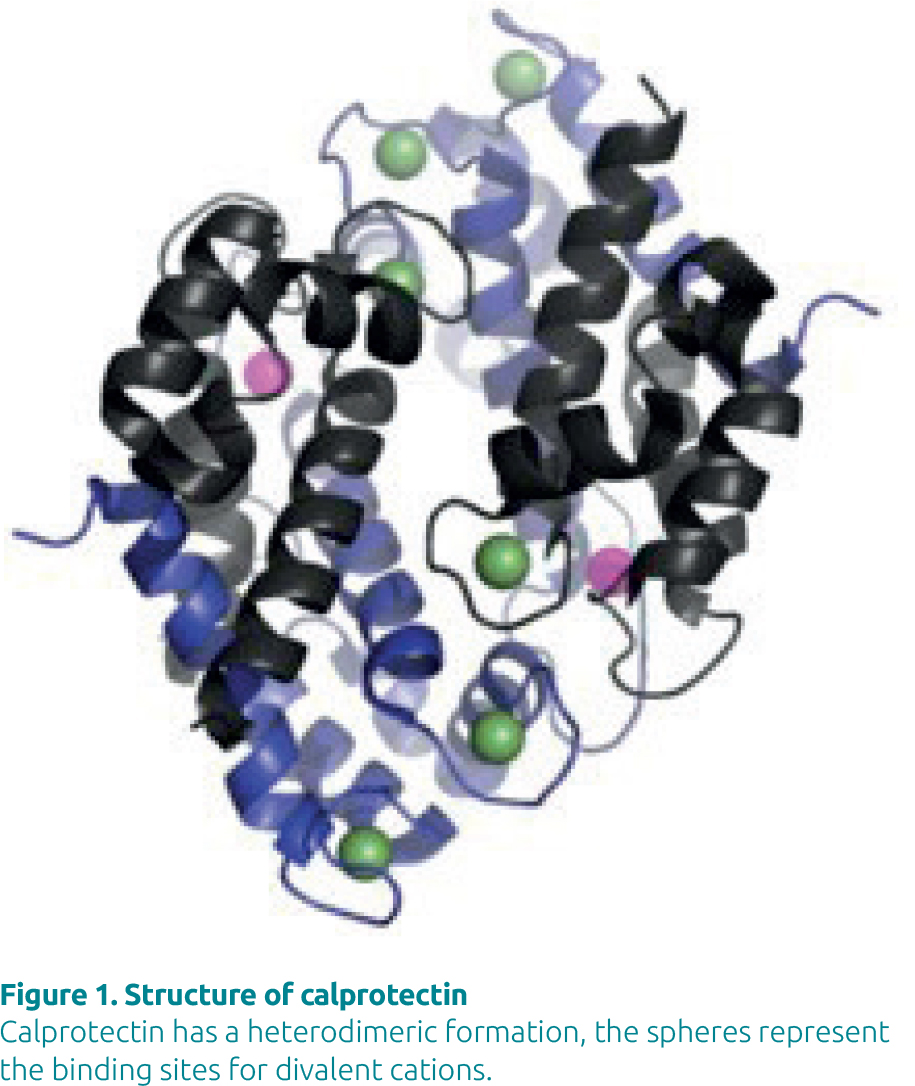 It may not be possible to differentiate organic disorders, especially IBD from functional disorders such as irritable bowel syndrome, on the basis of clinical features alone and investigations are often required. Blood tests for the assessment of inflammation (for example C-reactive protein, erythrocyte sedimentation rate) lack the sensitivity and specificity required for diagnosis of IBD and the gold standard investigation for the diagnosis of diseases of the lower gastrointestinal tract is colonoscopy. This enables direct visualization and gives an opportunity for biopsy so that a histological diagnosis can be made. However, it requires significant healthcare resource, is unpleasant for the patient and is associated with morbidity and mortality.

Use of fecal calprotectin as a simple, non-invasive marker of gastrointestinal inflammation, therefore, has great potential. Calprotectin has been shown to be highly reliable in the diagnosis of IBD, showing pooled sensitivities and specificities of 80–95% and 76–97%, respectively. In 2010 it was calculated that screening for IBD by measuring fecal calprotectin could result in a 67% reduction in the number of adults requiring colonoscopy. In 2015 use of the test in the differential diagnosis of IBD or irritable bowel syndrome was supported by the National Institute for Health and Care Excellence (NICE).

IBDs tend to have a relapsing and remitting course and symptoms of gastrointestinal inflammation may be non-specific, which can complicate clinical assessment. In patients with established IBD, measurement of fecal calprotectin can be useful in ongoing disease management and may reduce the need for repeat colonoscopy. Situations in which fecal calprotectin analysis has been shown to have a clinical role include monitoring IBD activity, reduction of relapse, indicating recurrence after surgery and monitoring response to treatment, thereby facilitating timely escalation or discontinuation of treatment.

Some studies have investigated the performance of calprotectin as a screening test for all organic bowel disease, including colorectal cancer. Sensitivities and specificities are less than for diagnosis of IBD alone and recent work suggests that the fecal immunochemical test (FIT) may be a superior predictor of the absence of significant bowel disease in adults in primary care.

Various issues need to be taken into consideration when measuring calprotectin and interpreting results (Box 1).

Box 1. Important factors to be considered when analysing and interpreting fecal calprotectin

Methods for measurement of fecal calprotectin

There are a number of commercial methods available for measurement of fecal calprotectin. These are based on immunochemical techniques and include enzyme-linked immunosorbant assays (ELISA) and immunochromatographic and immunoturbidometric techniques. There is generally qualitative correlation between assays but quantitative agreement is suboptimal (Table 1). This may be related to differences in the antibodies used and emphasizes the need for a standardized calprotectin reference material.

Before measurement, a sample pre-treatment process is required to enable extraction of calprotectin from the feces into a buffer solution suitable for analysis. The original method involved weighing out small amounts of feces and adding them to buffer, but the majority of laboratories now use commercially available extraction devices consisting of a sampling probe and a tube containing buffer. Some of these devices can be given to the patient, others are used by laboratory staff to process samples collected in the traditional manner. Extraction devices have been shown to under-sample compared with weighing out of sample, particularly in feces with a watery consistency which may be difficult to transfer using a sampling probe.

An early and widely cited clinical study on the use of calprotectin stated it to be stable in feces for seven days. However, it has subsequently been shown that in fecal samples left at room temperature, the mean change in baseline calprotectin is about 30% although it is stable at 2–8 °C for at least 10 days and at −20 °C for at least a year and can withstand at least four freeze− thaw cycles. Once extracted into buffer calprotectin may still be subject to degradation at room temperature but this has been found to depend upon the method-specific extraction buffer used. Delay in return of unrefrigerated samples to the laboratory, or their movement between laboratories, has potential to lead to degradation of calprotectin and a result which may be unrepresentative of a patient’s clinical status.

Use of an extraction device and rapid immunochromatographic assay together with a smartphone application now enables patients to measure their calprotectin at home and send results, via a secure portal, for review by their gastroenterologist; results have been shown to be comparable with those obtained by ELISA within a laboratory setting. Self-monitoring is welcomed by many patients and has great potential as a tool to facilitate virtual consultations, reducing the need for hospital visits.

A cut-off value of 50 μg/g is quoted by many manufacturers as the upper limit of the reference for fecal calprotectin in adults. However, data from a pilot External Quality Assurance scheme showed that the assay used had potential to affect patient classification around this cut-off. Calprotectin concentrations have been shown to be higher at the extremes of age; studies in healthy infants reporting median concentrations of about 250 μg/g with a ranges extending to over 2000 μg/g.

The choice of cut-off value for use in clinical pathways needs to balance sensitivity and specificity, reflecting that the test is not performed in isolation but in combination with assessment of clinical status. Minor and transient episodes of gastrointestinal inflammation can raise fecal calprotectin and so although a calprotectin level >150 μg/g suggests IBD, a single measurement of 50–150 μg/g may not. Depending upon the context, repeat analysis is likely to be appropriate. On repeat, ongoing elevation or a rising calprotectin level increases the likelihood of IBD. Because of the differences between manufacturers, laboratories should ensure that any cut-off values are optimized for the particular assay in use.

Although calprotectin has been shown to have a homogeneous distribution in feces, significant day-to-day variation has been observed, particularly in patients known to have IBD. It has also been observed that there is variation during the day and that concentrations of calprotectin increase with increasing time between bowel movements. Although it has been recommended that calprotectin should be measured from the first stool passed in the morning, more recent guidance suggests that when monitoring IBD it is better to measure more than once, with time of sampling being less important.

Non-steroidal anti-inflammatory drugs, such as aspirin and ibuprofen are associated with a rise in fecal calprotectin. With short-term use, the reason for any elevation is likely to be the development of intestinal inflammation. Long-term use of these agents can cause a specific enteropathy, possibly the result of drug-induced suppression of prostaglandin production with dysregulation of blood flow and mucous production.

Measuring calprotectin concentrations is useful for the diagnosis and monitoring of IBD and has been proposed as a tool to rule out significant bowel disease.

However, there are specific pre-analytical and technical aspects that need to be taken into account when measuring calprotectin levels and interpreting results. 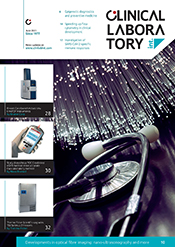