World-first: A biomarker that can diagnose Parkinson’s disease

Researchers at Kobe University and Hiroshima University have successfully developed a bio-
marker that will enable Parkinson’s disease to be rapidly and inexpensively diagnosed from blood serum samples.

It is hoped that being able to diagnose the disease faster will also lead to the development of new treatment methods. This would be greatly beneficial, especially for ageing societies like Japan.

Research background
Japan has the fastest growing elderly population in the world and is consequently facing related issues such as the decline in elderly people’s Quality of Life (QoL) and pressure on the caregiving sector. A similar problem is facing many countries in Europe. As people age, their risk of developing various diseases increases. In particular, neurodegenerative diseases such as Parkinson’s disease have a significant impact on the sufferer’s QoL. In addition, Parkinson’s is the second most common neurodegenerative disease in the world; believed to affect around 1~2% of the over 60s population. Furthermore, it is predicted to cost the global market US$19.9 billion (including treatment costs) in 2030.

Currently, there is no way of completely curing Parkinson’s disease. Therefore, early detection is vital in order to stop its progression. In addition, it is predicted that even earlier detection will be important in the future as various pharma-ceutical companies are currently working on developing therapeutic drugs for Parkinson’s.

In light of these circumstances, there is a pressing need for a simple screening method that puts little burden on the patient. In addition, early screening methods in particular should be easy to carry out and inexpensive.

Research methodology
The drug metabolizing enzyme Cytochrome P450 not only metabolizes drugs but also serves as a catalyst for the oxidation of various substances. It is known that the expression of P450 inside the body changes with the onset of various diseases. This change in P450 expression is thought to affect the quantity and quality of metabolites in the patient’s body that are related to P450. This research group previously came up with a ‘P450 inhibition assay’ to easily detect changes in the quality and quantity of P450-related metabolites brought on by the onset of disease. This time, they became the first in the world to successfully apply this method to Parkinson’s disease diagnosis.

Cytochrome P450 enzyme is a hemeprotein that plays an important role in many processes, such as metabolizing various drugs and synthesizing hormones. P450 is also responsible for oxidizing a large number of substances. In humans, 57 molecular species of P450 are known to exist. P450 is mainly expressed in the liver, however it can also be expressed in other parts of the body such as the lungs, the gastrointestinal tract, and the brain.

In the developed assay, 12 different human P450s are each mixed with a serum sample and a fluorescent substrate to cause a reaction. There are differences in quantity and quality of P450-related metabolites in the sera from healthy individuals and patients. These serum metabolites inhibit the P450-mediated oxidation of the fluorescent substrate. By looking at the inhibition rate related to disease onset-mediated alterations in certain P450s, it is possible to discriminate sera samples from an individual with a specific disease and a healthy subject. P450 reacts with the fluorescent substrate to generate a fluorescent substance when the assay is performed on the sera from healthy individuals. However, the reaction is different when the assay is conducted on the sera from patients and thus the obtained fluorescent values change. In this way, the ‘P450 fluorescent inhibition assay’ can be used to determine whether or not a disease is present by detecting these changes. It is a new liquid biopsy technique that didn’t exist until now.

Results
The results of this study have shown that the ‘P450 inhibition assay’ has the potential to be applied to the diagnosis of Parkinson’s disease. This assay only requires mere 30μ of serum and is a comparatively inexpensive testing method, therefore it is thought that it will benefit Parkinson’s disease screening. Next, the researchers will conduct clinical performance evaluations on a larger scale, with the aim of working towards the implementation of this testing method. 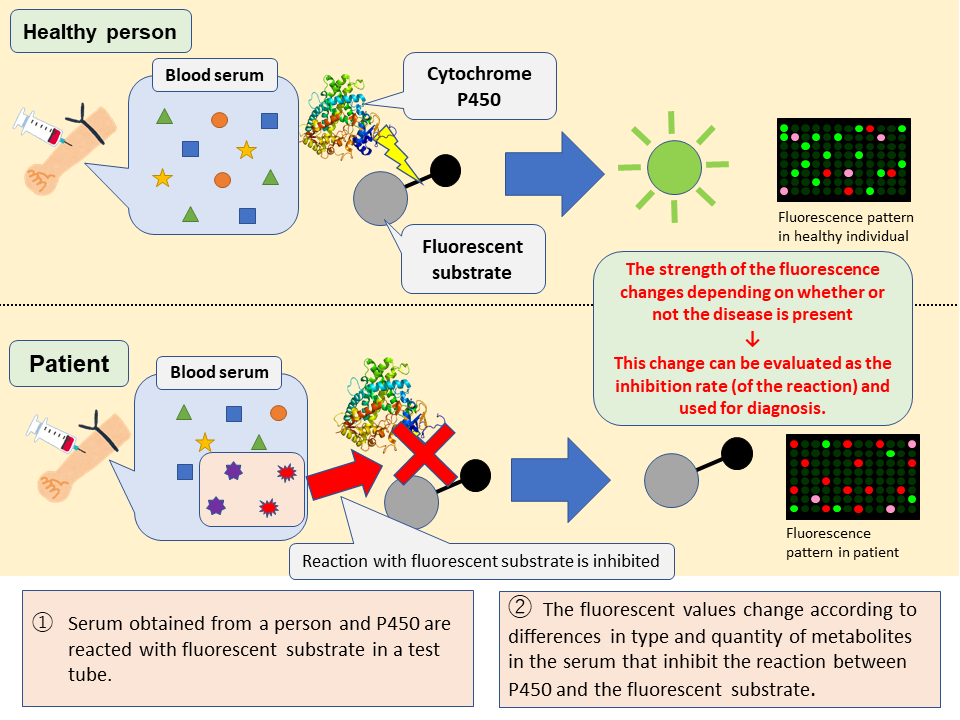 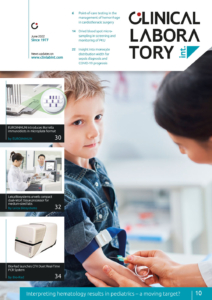